12 things you didn’t know about the Land Rover Defender

1. The original Series I Land Rover cost £450 in 1948. It was powered by a four-cylinder 1.6-litre engine that produced just 50bhp.
2. Since 1948, a total of 2,016,933 Series Land Rovers and Defenders have been built on the production line at the company’s factory in Solihull
3. Each Defender took 56 man hours to build, compared to the 48 hours it takes to build a Land Rover Discovery Sport.
4. Before production ended on Friday 29 January 2016, a new Defender rolled off the production line every four minutes.
5. Over 10,000 Land Rover owners and visitors from all over the world have visited the Defender Celebration Line, which recreates the original 1948 production line, in the 12 months since it opened.
6. Previous famous owners of Series Land Rovers and Defenders include the Queen, Sir Winston Churchill and actor Steve McQueen.
7. Land Rover Experience – which currently operates from 33 centres around the world, including in Russia, China, the Middle East, North America. South Africa and Scandinavia – was formed in 1990, taking over from the Demonstration Team that had been set up by Roger Crathorne to show the talents of the vehicle around the world.
8. The Defender became a movie star when it was featured heavily in the 1966 film Born Free, which told the story of Elsa the lion. Defenders are still being used today by the Born Free Foundation, its founder, Virginia McKenna OBE, and her son, Will Travers OBE – both of whom both fitted parts to Defender 2,000,000 that recently sold at auction for £400,000.
10. Each Defender is comprised of over 7,000 individual parts.
11. Workers on the Land Rover production line have their own nicknames for parts of the vehicle: for example, the door hinges are known as ‘pigs ears’ and the dashboard is the ‘lamb’s chops’.
12. Despite the end of Defender production, the Jaguar Land Rover plant in Solihull still produces the Range Rover, Range Rover Sport, Discovery, Jaguar XE and Jaguar F-PACE models. 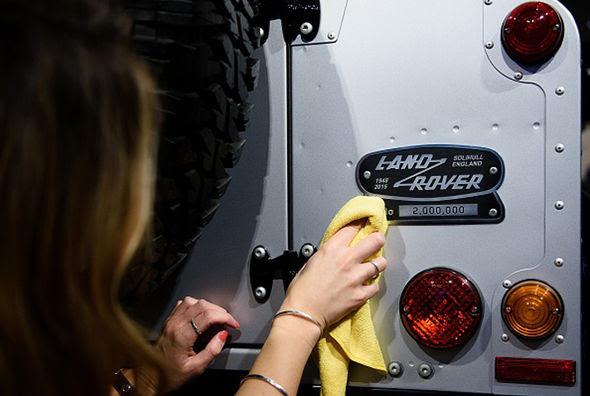