88 inch, Series 1 Land Rover. Vehicle for restoration needs - bulkhead repairs, floor repairs, chassis repairs, wing mirrors need replacing, as do the rubber seals around the windows and doors. Currently there are two seats from the front missing. Wiper motor works by hand. There is only one bonnet catch (near side one present). Near side rear is bent, and has been since brought due to rear cross member being hit at some point before ownership. There are two free wheeling hubs (on the two front wheels). Gauges and switches are in tact. Vehicle electrics haven't been checked. Two of the windows are cracked, (back near side window, off side window by tailgate). Engine is diesel not petrol as sated on the paper work. Engine size is 2.25cc. Engine turns over by hand, with compression. Has not been run since owned, have owned since 2011. At present I have the V5C, Notification of SORN, Old copies of MOT's and Log Books. One of the Log Books states that it was registered in 1955. Chassis number was checked on the internet which shows manufacturer to be in 1957. Vehicle is road registered in 1966, after being used by the military. 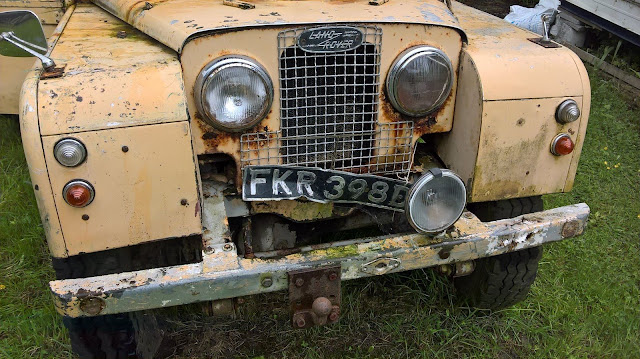 Posted by Defender LandRover at 18:16