Land Rover Series 3, Ex Military civilian spec , originally bronze green , 1975 making it now tax exempt, SWB 88 , hard top , 2.25 Diesel. This Land rover started its life in military service in 1975, its military Reg is 18GF02 which donates military service 1974/75 Army and was demobbed in 1984. Originally it would have been a 2.25 petrol but at some time this has been replaced by a Land Rover 2.25 diesel. As you can see from the pictures its a restoration project, the chassis is not bad, good rear x member and front legs, the out riggers will need replacing and there are patches required under the rear chassis rails, the bulk head needs repairs to the usual places, top corners, vent flaps and foot wells. Body work is quite good and its fairly straight, it does need door tops and of course there is 20 layers of flaking paint. It has at some stage had something bolted to the roof as there are 4 holes in each side (that will require blanking plugs) and an unusual alteration to the o/s roof just behind the drivers door. The interior is not good, something has chewed the dash and the seat cushions are missing, however there are a pair of non standard seats supplied. Those of you with a keen eye would of spotted that the gearbox is in the rear, this was removed by the previous owner as a half hearted attempted to start the restoration, the seat box and the internal panels are not bolted in and are loosely placed together, there is a rebuild plate stuck on top of the transfer box, this may be a military rebuild but i am unsure. The engine turns freely by hand but i have not attempted to start it my self, the previous owner informed me that it was a running driving vehicle before he took it off the road to restore, the brakes and electrics are also untested. It has free wheeling hubs fitted and wider LWB rims. 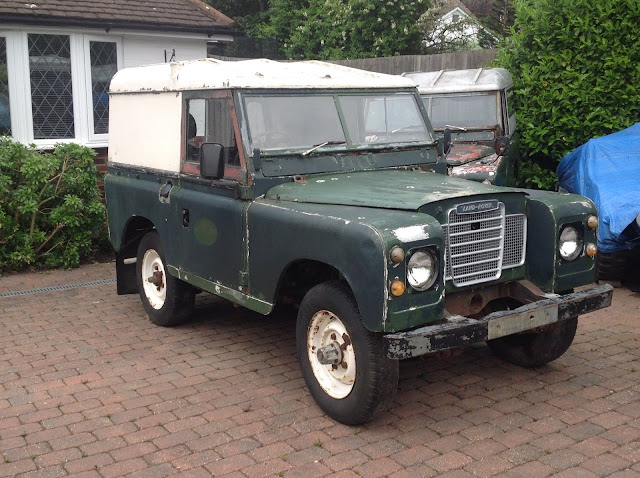 Posted by Defender LandRover at 22:26