Sellers Comments - With a heavy heart i am selling my ex NATO Defender 110. Now i don't know alot about these as this was my first one and i intended to keep her but circumstances have changed.

She started life as a field ambulance before travelling to Bosnia to serve in Op Resolute. She has also been with the Signals and Royal Artillery. She was decommissioned in 2012 where she started her civilian life.
The paint work is not the best ever (bear in mind it is ex-army) and as you can see from the pics they have had a good time with the fuse box. When driving the fuses sometimes touch causing the headlights to not work and this is how they are currently. Other than that she is roadworthy and goes really well, slow but well. It is the 2.5 N/A engine. I have recently put a new rear door on her and a new window seal. I have some other parts such as a new rear exhaust, another wing box, fuse box (just never got round to getting it fitted) and as you can see i have also got a set of Military Police signs and blue emergency lights (never fitted so can't say they will work but look new). I also have a couple of antennas for the boxes and the blue engine paint which again i never got around to doing.
The mileage is recorded in kilometers and not miles so the reading is 186084 (115627 miles). It was MOT's on 186042 so has travelled very little and been sat in the garage. There is a Merlin report which i will email to the new owner and some paperwork. I have a receipt for work carried out in January 2016 which is for o/s/f wheel bearing, rear wheel cylinders. In December 2015 she also had the head gasket done, cambelt, cambelt tensioner, glow plugs, oil filter, air filter, fuel filter, washer pump, new radiator and all lubricants refreshed.
I currently pay £90 a year insurance through Cherished Vehicle Insurance and am a member of the Military Vehicle Trust.
The seats have been replaced recently (passenger has a little tear in it but nothing major) and i also bought two very near to new rear benches with seat belts that the new owner will have to fit. I'm sure there are some other window seals knocking around so i will find them and throw them in with the sale.
The tyres are all good and are the G90's. She originally was a soft top and later had the hard top added. Therefore you can take the window tops off the drivers and passenger sides and drop the windscreen down for the summer months if required. 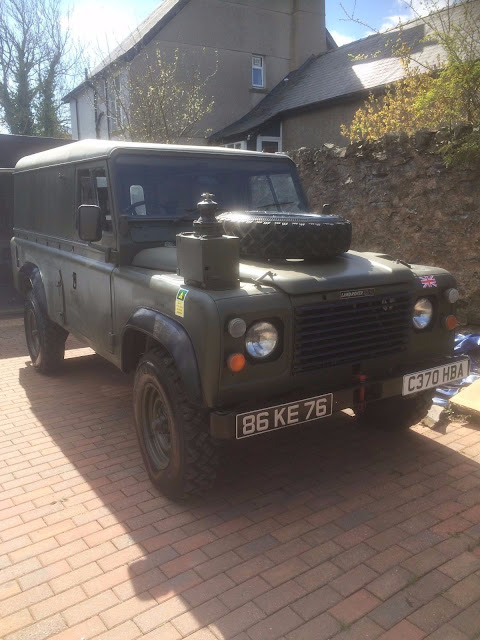 Posted by Defender LandRover at 15:39