Ex-mod Landrover Defender 110 2.5n/an Up for auction is my defender which is no longer practical for what I need. It has been my daily transport for the last 2 years and has been serviced annually and has had the cam belt and a second-hand injector pump fitted as the old one was leaking and a new fuel tank sender unit was fitted with new glow plugs and relay, so it starts on the button regardless of cold weather. It's had a new complete rear cross member fitted for the mot, and the canvas was patched as it had a few small holes and was treated with fabsil. Iv fitted a usb charger and cigarette point , these blend in well with the military dash and has three seats upfront and 2 bench seats in the rear with lap belts. On the id tag on the seat box it states it's a winterised model defender , it was changed from a pickup to a canvas top by the previous owner and has full type doors and not the split type ones. I have removed the viscous fan as it very rearly gets warm and I seem to think it drives better with it of as it doesn't have a great deal of power anway. It has no power steering and will sit at 60mph but is pretty noisy so better at 50mph as its still got the military 1.6 transfer box on. All tyres are matching Goodyear g90's that have lots of tread , the spare is a Michelin xzl and has a few cracks but serviceable as a spare. It also has tubular front suspension turrets , pro comp shock absorbers and genuine Landrover folding side steps and an ardcase pedal lock box. The land rover has covered 100663 km and has no oil leaks. Overall this is a mechanical sound and structural ex mod 110 that will sadly be missed by me and the kids but I'm in need of a van . The v5 is present but Iv misplaced the mot which expires 15 January 2017. 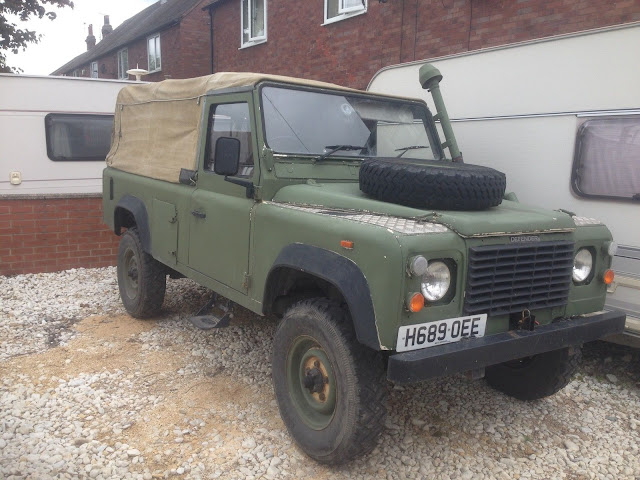 Posted by Defender LandRover at 16:27