Sellers Comments Expedition camper based on a 130" Land Rover Special vehicles chassis, originally built for the Midlands Electricity Board, with a single cab, and a quad tech body. Myself and my family wanted to do a world trip, and built the camper with this in mind. It was built to be comfortable for 2 adults, and 2 children. It was designed to be 6" high inside, 6" wide, and had to have a cassette toilet & cubicle. I did a 1/10 scale drawing (which I still have), and one of my customers happened to be building composite quad tech bodies for Land Rover, so they took my drawing, converted it into a cad drawing, and all the body panels were ordered flat packed, and arrived on a truck a few weeks later. As the body is 6' wide, I widened the cab, having 4" put in each side of a brand new bulkhead, then it was just a matter of making a wider windscreen surround, and also the front wings, so now it doesn't need the rubber arches. This means, you are not stuffed up against the doors, like a normal defender! The floor is 50mm thick with insulation, and the walls and roof are 27mm thick with insulation, the walls and roof are faced with fibreglass both sides, which makes for a very clean finish. It has a rear door that hinges at the top, and is lifted by gas struts. In 2001 we did a trip half way across Russia to the Altai Region, with kids aged 4 and 6, we were there a month, and it took 8 days of driving each way in Russia, all in all, it did 10000 miles in 3 weeks of driving. It has all the comforts you would want in an expedition vehicle, 220v hook up, plug in systems panel, sterling battery charger, leisure battery, and even a couple of solar panels on the roof, sink, gas hob, oven and grille, microwave (220v), pumped water from military plastic water carriers (easy to sterilise). It has 2 on board propane tanks, which you fill from autogas pumps (cheap), and even a barbecue point. The fridge is 3 way, and works well. There is plenty of storage space, with 4 overhead lockers for clothes, 2 overhead lockers in the kitchen area above the sink and stove, with a large locker at the back for food with a shelf below for tools. There is an open locker below the fridge, where we carried 2 Honda 1000w inverter generators. There is a permanent double bed above the cab, and another can be made up using clip together plywood base, and mattresses carried on board. It has the Thetford Cassette toilet, and even a shower, but in practice, we found it easier to bathe in Rivers & Lakes. Mechanically, it is a standard 200tdi engine with LT77 5 speed gearbox, both the gearboxes were reconditioned by Legs in Oswestry, when we returned from Russia. It has an Allard intercooler, which really helps.It has a heavy duty rear anti roll bar, which stops a lot of roll. It has a PTO driven superwinch, with 100 feet of dyneema synthetic rope. Range Rover vented discs fitted, with proper spacers to front calipers, heavy duty rear springs, with air helpers inside, controlled from the dash, and a viair compressor fitted under the bonnet, to give on board air in a receiver mounted to the rear cross member, so you are able to inflate your own tyres. It has an eberspacher 12 volt diesel fueled air heater heater, which I will have serviced, so you can keep nice and warm. Seitz double glazed windows fitted all round with built in roller fly, and privacy screens, the roof has 3 opening skylights, with privacy/fly screens fitted. There is also a military escape hatch fitted above the front bed, which in reality is just an aluminium version of a glass sun roof, you can open it, or take it out, and gain access to the roof, which can also be accessed by a ladder at the back. The chassis is sound with no welding, although waxoyling it wouldn't be a bad idea. It has hi lift jacking points at the back, and in the front bumper. The camper will cruise at 65mph all day long, big hills will knock it back, but it hustles along quite nicely. It is in the May edition of Land Rover Owner, with a photo taken at Tyungur bridge in the Altai, google it in maps and images, and you'll see how far we got (1/4 way round the world!). I don't use it very often, its been to Glastonbury Festival twice with friends (would have like to take it myself!) I have built a camper based on a new Mercedes Sprinter, that does everything I need, so its time for someone else to take her to new places! I will supply it with a 12 month MOT. Please don't expect a super comfortable RV, this is about as comfortable a Land drover expedition vehicle, as you are likely to get, which can still cover long distances in a reasonable time! 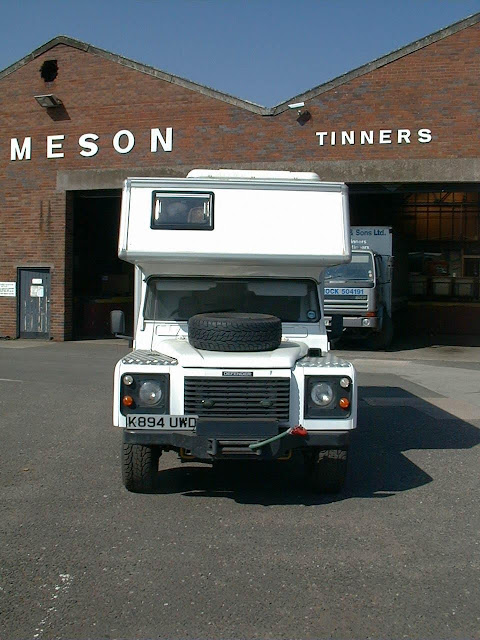 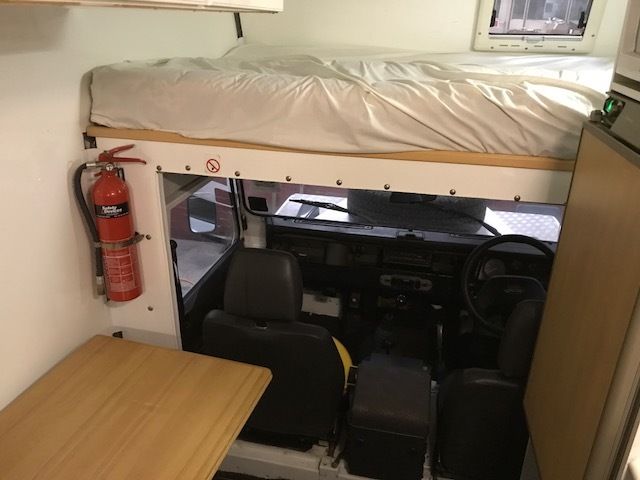 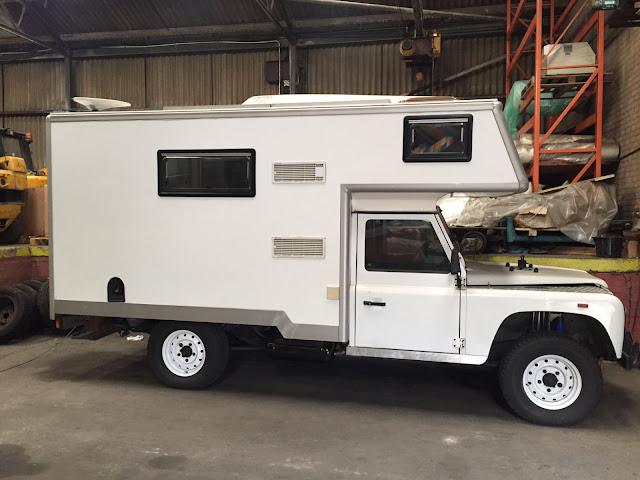 Posted by Defender LandRover at 19:28