.Sellers Comments Welcome to my listing for my Ex MoD Land Rover Defender 110 TD5 9 Seat Configuration (Rear Load Seats Removed) First Registered JAN 2006 97K mles. MoT issued 02 Jun 16 and is currently taxed and registered on a civilian number - 55 plate. This vehicle was supplied to the military via Land Rover Special Vehicles as an original Belize Green Station Wagon "S" with a station wagon VIN and has been painted using the standard military NATO green. The outside has been painted but the door shuts, inner wings, interior etc. are still Belize Green so it would be really easy to do a nice simple return to original colour or a more contemporary metallic. Please also be aware this vehicle has fitted with a speed limiter all of it's life and therefore been limited to 40mph - so it's never been thrashed and the engine will probably outlive any other TD5 of a similar age. Although the speed limiter is still fitted it has been reprogrammed to allow it to be driven "normally" now. Since having a new ignition switch/steering lock fitted, as the old one was defective, the engine starts first time on the button and runs nicely (sounds very sweet IMHO). The Landy drives nicely (as much as any Defender) and has what appear to be 4x new Wolf wheels and almost new Michelin XZLs at about £700 value. It's also fitted with a genuine Land Rover "Dixon Bate" style adjustable tow bar mount so you can fit/swap a NATO or 50mm ball easily. The general condition of the Landy is very good but obviously the cosmetics need a bit of attention, or not, depending on your needs! The rear load area seats have been removed but the bars are there to refit them if you want the 9 seat configuration or you could fit 11 seat option. Most panels have a dink, scratch or two but are fundamentally sound and could probably be pressed back into position with the right skills and tools. The notable exceptions being the LHS front inner wing front panel (the bit that holds the headlight) that really could do with replacing and the rear door that has a small hairline crack near the wheel mount that doesn't look too difficult to repair. The bumper is bent but looks like it'll pull straight and I have a used bumper to put on it. The passenger door looks like it has been recently replaced, and is therefore a slightly different colour, but it looks like the wind caught it and wrapped it back on itself. I would expect it's fairly easily fixable. The check strap was broken but I have a new one. Both the bulkhead and chassis seem solid on a cursory inspection (and on the MoT) however as there is some light rust on the RHS bulkhead top hinge but it's early enough to catch it, as is the light rust on the rear bulkhead I would strongly recommend taking some preventitive actions to tidy them up and prevent further development as these vehicles are well known to have soft spots in those particular areas. The marks under the rear doors are just powdery electrlytic surface corrosion that I would expect would buff/rub off - again a common Defender trait although it is perforated slightly and new panels can be picked up on ebay for about £30-40 a PAIR. As mentioned elsewhere the passenger door seems new and the driver's door has just been replaced with a solid used item. The seat squabs have splits in the pictures but I have virtually new replacement dark grey seats that I will include at the BIN price of £9,900. Given that there's another 2006 Ex-MoD Defender 110 station wagon currently on a famous auto-sales web-site at £17K (see last picture) there's a lot of scope here to pick up this TD5 and run it as-is at half the cost or alternatively with a respray (I have had a couple of quotes for specialist Land Rover garages to respray at about £3-4000 - depending on colour etc.) and a bit of TLC on the internals, with the opportunity to double it's value at a fraction of the difference. I am happy to do this myself if it doesnt sell fairly quickly. In fact the only reason I'm selling rather than respraying for myself is after a tough talk with my other half about how many Defenders I have already and I'd rather let the new owner choose whats right for them (also happy to get it done for you if you prefer). The pictures shown are "as-released" without even being washed - so you are literally seeing it at it's worst, with nothing to hide, it's a steal at the starting price and represents a great value light tidy up and respray project to double it's value at the Buy It Now price; the Landy has had an MoT since release and has now undergone the following required items to obtain a ticket; New Brake Pipes - All Round New Rear Brake Pads New Radius Arm Bushes New Ball Joint Gaiter There were a few minor advisories; chaffed seat belts coil springs corroded x4 minor exhaust leak (top section) ...but those items passed anyway - nothing I'd consider sinister or expensive. As mentioned the Landy has had an MoT and the work to get it's ticket has been done so it will be supplied registered with a MoT. In addition we have carried out the following "basic tasks" to make the Landy a bit more reliable/secure; New High Capacity Battery New Steering Lock New Rear Door Lock New Lock Set (same key for ignition and doors) New Drivers Door (Used) New Air Filter New Air Flow Meter New Indicator Assembly (Lucas OEM) Obviously I'll need a deposit from the winner after the auction and would be happier with a quick collection and balance by bank transfer or cash (before releasing the vehicle). 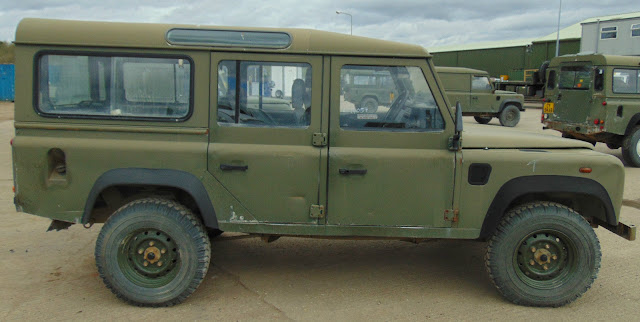 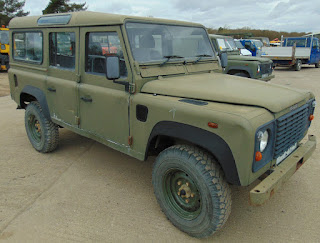 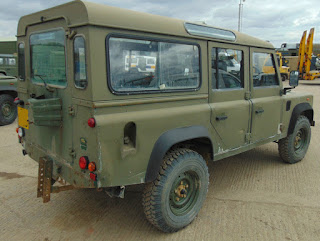 Posted by Defender LandRover at 18:03