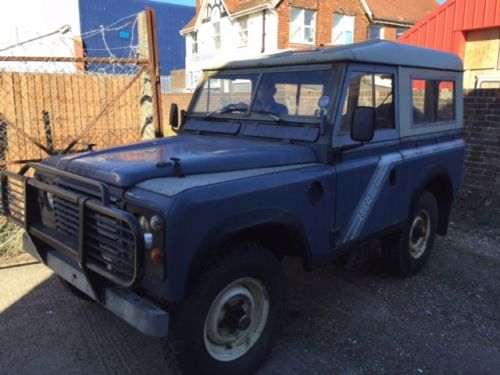 1974 Series 3 Landrover 88" Hardtop which is now (we believe) tax exempt, it is currently SORN, and he has not used it for a couple of years.i

Just been mot'd (17 July 2017 expiry).
It starts no problem (even on the hand crank!) & runs fine, It drives like any landrover of 42 years old, complete with the obligatory oil drips and rattles. It does require some TLC, it is what it is!!
He bought it with the intention of refurbishing it, but a house purchase put paid to that & so he has regrettably decided to sell it.
It has 5 new tyres
New Rocky Mountain Parabolic springs & shocks all round
The door tops have been replaced with galvanised ones by the previous owner, who also told me that the engine was replaced with a reconditioned  ex military one after an oil pump failure.
The roof over the cab has a sun roof.
It does have some rust and the doors / windscreen leak a bit
The door cards have been replaced with ali chequer plate
The front has a defender grill & bonnet fitted.
The bulk head requires some repairs
He bought this nearly 3 years ago with the intention of stripping it down & renovating it, but as it hasnt happened, the space is needed & it has to go.
He has many spares for it including a bulkhead, roof, axles, wings etc which he bought when he was keen to do it up, these will be advertised separately and are not included in this sale,
Winning bidder to collect from Eastbourne within 7 days of the end of the auction
A £200 deposit required by paypal within 24 hours of the auction end, and the balance in cash on collection.
It is advertised locally, and we reserve the right to withdraw it from this auction

Posted by Defender LandRover at 20:21