Sellers Comments - During summer 2021, the standard (95 octane) petrol grade in Great Britain will become E10. In Northern Ireland, this will happen in early 2022.

The change in fuel applies to petrol only. Diesel fuel will not be changing.

Almost all (95%) petrol-powered vehicles on the road today can use E10 petrol and all cars built since 2011 are compatible.

If your petrol vehicle or equipment is not compatible with E10 fuel, you will still be able to use E5 by purchasing the ‘super’ grade (97+ octane) petrol from most filling stations.

Petrol pumps will clearly label petrol as either E10 or E5.

Check your vehicle is compatible with E10 petrol

You can check if your car, motorbike or moped can use E10 petrol by using our E10 vehicle checker.

E10 petrol is already widely used around the world, including across Europe, the US and Australia. It has also been the reference fuel against which new cars are tested for emissions and performance since 2016.

CO2 is one of the greenhouse gases that contribute to climate change and the main benefit of E10 petrol is that it reduces overall levels of CO2-based vehicle emissions.

By blending petrol with up to 10% renewable ethanol, less fossil fuel is needed, helping us reduce carbon emissions and meet climate change targets.

The introduction of E10 petrol at UK forecourts could cut transport CO2 emissions by 750,000 tonnes a year – the equivalent of taking 350,000 cars off the road, or all the cars in North Yorkshire.

Renewable fuel blends, such as E10 petrol, are generally introduced to reduce overall CO2 emissions. They have little impact on emissions associated with air quality and public health.

The production of renewable ethanol for blending with fossil petrol also results in valuable by-products, including animal feed and stored CO2.

Using E10 petrol can slightly reduce fuel economy (the number of miles you are able to drive on a gallon of fuel). You may see a reduction of around 1%, but it is unlikely to be noticeable in everyday driving.

Other factors – such as your driving style or driving with under-inflated tyres or a roof rack – have a much more significant impact on fuel economy than using E10 petrol.

Around 95% of petrol-powered vehicles on the road are compatible with E10 petrol and this figure is increasing all the time.

The following vehicles, however, may not be compatible with E10 petrol:

You can check whether your vehicle is approved to use E10 petrol using our E10 vehicle checker, which covers cars, motorcycles and mopeds. 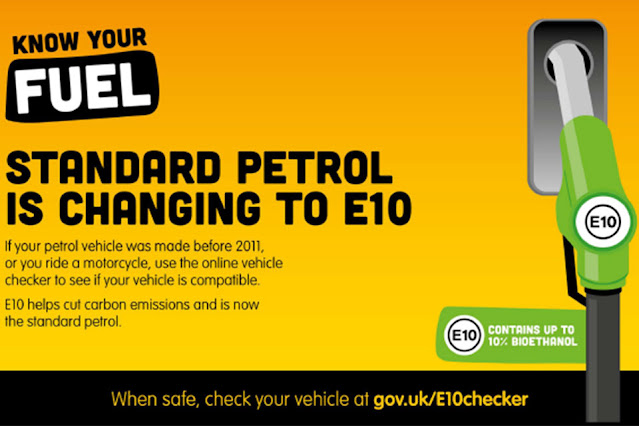 If your brand or model is not listed, consult your manual or contact your vehicle or equipment manufacturer. Vehicle MOT garages or workshops may also be able to advise on cars, vans and motorcycles. If in doubt, continue to use E5 (97+ octane) petrol.

Many manufactures of classic cars are not listed in the vehicle checker. Where older brands are no longer trading, we cannot provide specific information on vehicle compatibility.

Owners of vehicles not listed in the vehicle checker should continue to use E5 (97+ octane) petrol, which will remain available in the ‘super’ grade.

For further information, we recommend contacting classic vehicle owners’ clubs and associations, as well as garages that may be able to provide advice.

Continue to use E5 petrol in the ‘super’ grade (97+ octane), which will remain available at many larger filling stations. Make sure you check the label before you fill up.

Using a single tank of E10 petrol in a vehicle that is not compatible should not be a major problem. Just make sure you fill up with the correct E5 (‘97+ octane) petrol grade next time.

Unlike putting petrol into a diesel engine, you shouldn’t need to drain the tank. On a one-time basis, your vehicle will not suffer engine damage as a result. Prolonged use of E10 petrol in a non-compatible vehicle, however, may cause harm and is not recommended.

Boats, aircraft and other petrol-powered equipment

Some other petrol-powered equipment may not be compatible with E10 petrol including:

Owners and operators should check their manual or ask the manufacturer or dealer before using E10.

Owners of light aircraft that currently use E5 petrol known as MOGAS should continue to use E5 petrol unless expressly approved by their manufacturer or regulating body.

E10 is becoming the standard petrol grade in Great Britain, meaning E10 petrol will be available at almost all petrol stations across England, Scotland and Wales.

In Northern Ireland, we expect the introduction to happen in early 2022, subject to legislative approval.

E5 (97+ octane petrol with no more than 5% renewable ethanol), however, will remain available at filling stations that sell 2 grades of petrol.

Some rural, remote or very small filling stations may sell only either E5 or E10 petrol as standard.

At the filling station

At the petrol station, a circular ‘E10’ or ‘E5’ label will be clearly visible on both the petrol dispenser and nozzle, making it easy for you to identify the correct petrol to use. 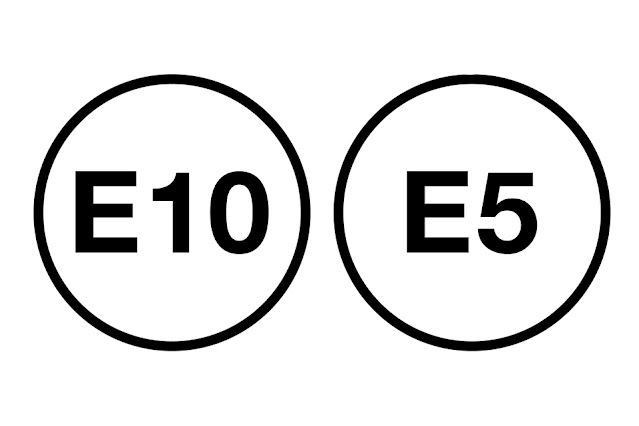 New vehicles manufactured from 2019 onwards should have an ‘E10’ and ‘E5’ label close to the filler cap showing the fuel(s) they can use.

If your vehicle or equipment doesn’t have this label, you can check their compatibility using our E10 vehicle checker. If you’re still unsure, consult your manual or contact the vehicle manufacturer.

Using E10 fuel will not affect whether you are able to drive in, or have to pay to enter, a clean air zone (CAZ), low emission zone (LEZ) or ultra-low emission zone (ULEZ). This is determined by your car’s Euro emissions standard and not by the fuel used.