Up for sale is my Series 3 Land Rover. I parked her up about 12 months ago and until today she hadn't moved since, so obviously there is no MOT/Tax. I bought the vehicle in January 2013, and had a fun couple of years doing some green laning until parking it up. I've too many vehicles and not enough time hence the sale, but I won't be giving it away and if it doesn't sell it will go back into storage until I find some time. After connecting up the battery she fired straight up and runs beautifully, the 2.25 petrol is like a sewing machine. The first 5 photos are as she came out the garage, the others are from last year showing the canvas hood and truck cab. * 5 bearing 2.25 petrol engine (original). * Almost new Cooper STT mud tyres (£600 done 300ish miles). * New Weber carb last year. * Electronic ignition distributer conversion. * Fairey Overdrive. * Nearly new bikini canvas with proper seat belt bar. (Truck cab for winter). * Bosch S4 battery new last year. * Raptor dash (partially fitted). * Kenlowe electric fan on dash switch. When I parked it up it ran perfectly, all the gears and the overdrive operate smoothly with no crunching. Brakes were good and stopped the vehicle really well. The chassis was really solid, it had a plate on the rear crossmember for the last MOT and that's it. When I bought the vehicle the tub braces were rotton so I replaced these and gave the top of the chassis a coat of por15. The bulkhead top corners are a bit rusty, I cut out the worst side and the new piece is just bolted on at the moment so needs welding in properly. The other side isn't too bad but will need doing eventually. These old Landys are so simple I don't think it will need much to go through an MOT, just needs a bit of time spending on it. 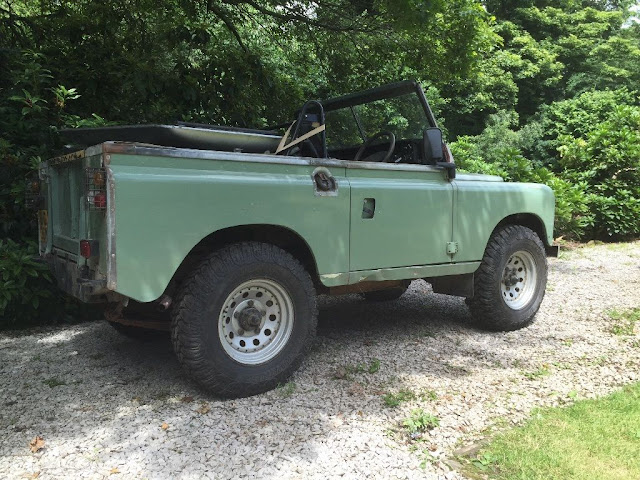 
Posted by Defender LandRover at 18:52