Here is my defender 90 300tdi 1999. County spec with factory extras of colour coded roof, arches and alloy wheels. Anyone who knows these vehicles will be the first to buy!! An unmolested going up in value 300tdi which is in excellent condition for its age. I have a lot of paperwork and recipts with the defender to back up what has been fitted over the years. I have owned the defender for a short time having ideas of doing all the things you should with one of these!! Unfortunately work and other commitments say otherwise (hence reason for sale). I am under no silly allusions as to the value of the defender so im telling all the silly time wasting idiots that frequent ebay not to bother getting in touch as im not interested in selling it for nowt!! (HOPE YOU GET THE PICTURE). That said, I shall continue. I have done very little to her since I bought her apart from changing the seized door locks, obviously all three locks were fitted to the doors with spare keys. I have only used her for weekend trips down to Clumber park and rufford with my daughters who love travelling in her, and round and about locally. I have not used her for towing or any off roading at all as my intentions were to tidy the small areas on the bodywork up and use her for shows. There is no evidence that she has ever been abused on or off road otherwise I wouldn't have bought her. The chassis has had a rear crossmember fitted prior to my purchace and looks to have been done professionally. The main areas that need work are as follows Rear tub requires paint and repairs. Rear o/s/wing requires small repair from a nudge by someone who failed to stop at a roundabout behind me. ( nothing drastic see pictures please). Also the lacquer is peeling off the roof and was the same when I bought her. It also requires the three doors to make perfect. In my opinion all easy rectified jobs that can be done on a weekend or as and when you can. None of the jobs inhibit the defender in any way shape or form an she can be used as is and very much enjoyed. The engine smokes a little on start up as most do but clears when warmed up. I haven't even had time to service her this year but may do before end of auction time permitting. I probably haven't painted the best picture of her but its better to let you know what to expect. Overall a well worth unmolested defender worthy of a few little jobs that will make her probably the best original one out there! Im not a trader but I do restore classic and vintage vehicles in my spare time so I know what im looking and talking about. Hope I have included everything, 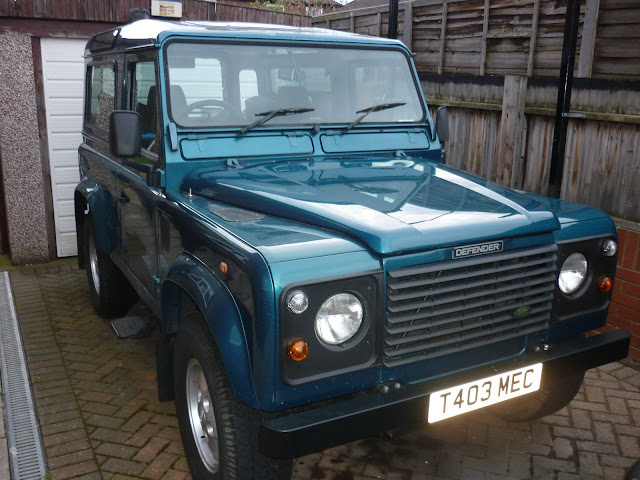 Posted by Defender LandRover at 19:09