No Water - No Overheating

No Water - No Corrosion

No Water - No Pressure

Auto Cool 180° allows your cooling system to run at a lower pressure, reducing the strain on engine components.

No Water - No Liner Pitting

Auto Cool 180° generates significantly less pitting when compared with all water based coolants.

Exceeding the limitations of water

Water is an excellent fluid for cooling whilst in a liquid state, but when water turns to steam it has virtually no capacity for heat transfer. Evans is a superior fluid for transferring heat in engines because it remains in a liquid state until above 180°C. This article details the benefits of a significantly higher boiling point.

Within an engine cooling system the hottest surfaces are those adjacent to the combustion chamber, specifically the cylinder liners and cylinder head. In these hot spots water is likely to vaporise preventing efficient cooling and causing loss of performance and unnecessary engine damage (see physical limitations of water). When the coolant fails in this way the engine becomes even hotter causing more hot spots and more steam.

Evans waterless coolants will not boil around these engine hotspots maintaining efficient cooling performance even when the engine is put under extreme conditions. When water turns to steam it pressurises the cooling system putting strain on hoses and other components. The significantly higher boiling point of Evans coolants means 75% less pressure than water resulting in a less stressed cooling system.

The Science of waterless cooling

Since the 1930's engine coolants have been based on a mixture of ethylene glycol, water and corrosion inhibitors. All such mixtures have inherent physical and chemical limitations that restrict engine performance and affect reliability. Evans Waterless Coolants represent a major step forward in engine cooling and engine protection technology.

Before filling your system with Evans Waterless Coolant it should be as free from water as possible. Evans Prep Fluid hygroscopically absorbs any residual water remaining in the system after draining.

Evans Prep Fluid actively removes the loose dirt and scale from your cooling system which can cause inefficient heat transfer.

Q. Why does my vehicle need Evans Waterless Engine Coolant?

Q. What is Evans Waterless Coolant made of?

Q. Which Evans Waterless Coolant is correct for my vehicle or equipment?

B. Classic Cool 180° is specially formulated for engines with more cast steel and iron, with reduced levels of copper and the introduction of aluminum products.

Q. Will Evans Waterless Coolant cause my engine to run at a higher temperature?

A. The operating temperature of the engine and coolant may increase slightly, by approximately 3-7 degrees. However the temperature inside the engine will be consistent and steam vapour will not be produced. i.e engines often run cooler with Evans Waterless Coolants.

Q. Can I add water to Evans Waterless Coolant?

Q. Which engine coolants are water-based?

A. All commercially available engine coolants, (usually in a 50/50 water / coolant formulation).Evans Waterless Coolant is the only non water-based coolant.

Q. What is the most important operational feature of Evans Waterless Coolant?

A.The huge separation between the operating temperature and the boiling point of the coolant, in the order of at least 80°C.

Q. What is the primary purpose of an engine cooling system?

A. To keep engine metal temperatures under control.

Q. What is the difference between Blue/Green and Red/Pink/Orange coolants?

A. Colour, there are however some general industry guidelines;

A. Most blue/green coolants have non OAT (organic acid technology) inhibitors, contain silicates and phosphates in their inhibitor package and should be changed every two years.

B. Most red/pink and orange coolants contain OAT inhibitors and can last three to five years.

C. From the 1990,s most manufacturers have started using HOAT (hybrid organic acid technology). HOAT based coolants can last three to five years. These have no particular colour scheme. (The above three products must not be mixed together).

Q. Does the colour of Evans Waterless Coolant products indicate any difference within the formulation of the Coolant?

A. Yes, All Evans Waterless Coolant is based on a proprietary inhibitor blend, the colour denotes the formulation specific to vehicle type.

A. Green denotes a Classic Formulation

B. Purple denotes a Vintage Formulation

Q. How do the OAT additives in Evans Waterless Coolant remain in solution without the presence of water?

A.Evans Waterless Coolant contains no additive that requires water to dissolve or to enable the additive to function

A. 4LIFE, Evans Waterless Coolant will last the life of the engine as long as it is not contaminated with water.

Q. What is bad about water in a coolant?

B. Because an engine operates very close to the boiling point of water,(within the engine block and cylinder head boiling actually occurs), thus causing pressure within the cooling system.

C. The boiling point of water is the failure temperature of the cooling system.

E. Water is aggressive toward cooling system metals and promotes electrolysis between dissimilar metals within the cooling system.

A. The critical temperature of a mixed solution will always be the boiling point of the weakest solution, water turns to steam vapour and is the weakest solution in the mixture, Some locations within the cylinder head generate so much heat that some of the nearby coolant boils. When local coolant boils, the resulting vapour is nearly 100% water vapour. If the coolant that is surrounding the water vapour is above the boiling point of water, the water vapour cannot condense. Under this condition, the water vapour makes an insulating barrier between hot metal and liquid coolant, causing the temperature of the metal to spike to high levels.

A. When the mixture is boiled the water part is fractionally distilled, as it is far more volatile than the glycol portion. Water vapour is liberated while the glycol remains in the solution.

What are various boiling points of interest?

What happens to the boiling points at higher elevations?

Do I use the same volume of Evans Waterless Coolant in my cooling system as before?

What is pump cavitation and how can it occur?

A. Action of the coolant pump creates a low pressure area at the pump inlet. Pump cavitation occurs when coolant near its boiling point encounters the low pressure area and flash vaporises (creates steam) within the pump. The gas pocket in the pump causes the pump to stop functioning and coolant circulation to stop. Coolant pump cavitation leads directly to catastrophic cooling system failure with the coolant being expelled from the system as steam pressure exceeds the pressure relief setting of the cap.

A. After-boil occurs after shut-down of a stressed engine when the coolant is near its boiling point and residual heat remains in the cylinder head. Upon shut-down the coolant pump ceases to circulate coolant through the cooling system. Residual heat boils the stagnant coolant, making steam pressure that exceeds the pressure relief setting of the cap. Coolant is pushed out of the system.

What unique limitations are there on a functioning cooling system using any water-based coolant?

What is the Reserve Capacity made available by changing to Evans Waterless Coolant?

A. The huge separation between the operating temperature and the boiling point of Evans Waterless Coolant unlocks a Reserve Capacity that already exists in systems designed for water-based coolants. Any cooling system designed to keep coolant below the boiling point of water depending on the pressure of the system under all operating conditions and after shut-down is liberated from those requirements with Evans Waterless Coolant. When temperatures happen to be higher, there are no failures due to the lower boiling point of water. In a 38°C environment (under bonnet) a radiator that is 121°C will dissipate 25% more heat than one at 104°C.

A. After shut-down, the huge separation between the operating temperature and the boiling point of Evans Waterless Coolant has the capacity to absorb heat from hot metal parts of the cylinder head, boiling is avoided and there is no build-up of pressure to force coolant out of the system. Stresses on cylinder heads are also avoided as metal temperatures are kept under control.

A. The huge separation between the operating temperature and the boiling point of Evans Waterless Coolant provides an environment where any locally generated coolant vapour immediately condenses into adjacent liquid coolant. vapour cannot then build into an insulating barrier, and contact between hot metal and liquid coolant is maintained at all times. Metal temperatures remain under control at all times.

A. The low-pressure area of the coolant pump is never at a low enough pressure to flash vapourise. The pump never gets vapour bound and has the capability to pump coolant over a broad range of temperatures.

A. Cylinder liner cavitation erosion is a problem in water-based coolant systems. As the piston moves inside the cylinder, there is vibration of the liner. The vibration of the liner against the coolant alternately makes low and high pressures. During the low-pressure instant, vapour is created by flash vaporisation. During the adjacent high-pressure instant, the vapour collapses against the cylinder liner. This repeated action causes an attack against the metal liner, resulting in cavitation erosion. Evans Waterless Coolant contains no water to allow flash vaporisation and therefore removes the threat of cylinder erosion.

Do I have to add antifreeze to the Evans Waterless Coolant?

A. No, Evans Waterless Coolant has antifreeze protection built in to protect to -40°C.

How much water is acceptable after conversion to Evans Waterless Coolant?

A. In all conversions, ideally water content must not exceed 3.0%.

How do you test for the percentage water content?

What will happen if I do not achieve the recommended 3% water content?

A. Even at above 3% water content Evans Waterless Coolants will still out perform all traditional water-based coolants. However for high performance and arduous conditions full benefit may not be realised. If the conversion guidelines are followed, rarely does the water content exceed 3%.

A. No, Evans Waterless Coolants contain Evans patented DeTox™ additive and has been classified as Non-Toxic by an EPA certified laboratory. However as with all chemicals, do not consume. Keep away from children. Avoid contact with eyes and skin. Rinse hands and eyes with water after incidental contact.

What should I do with the old coolant out of my vehicle?

A. Traditional antifreeze/coolants are toxic and should be disposed of in accordance with the local regulations. 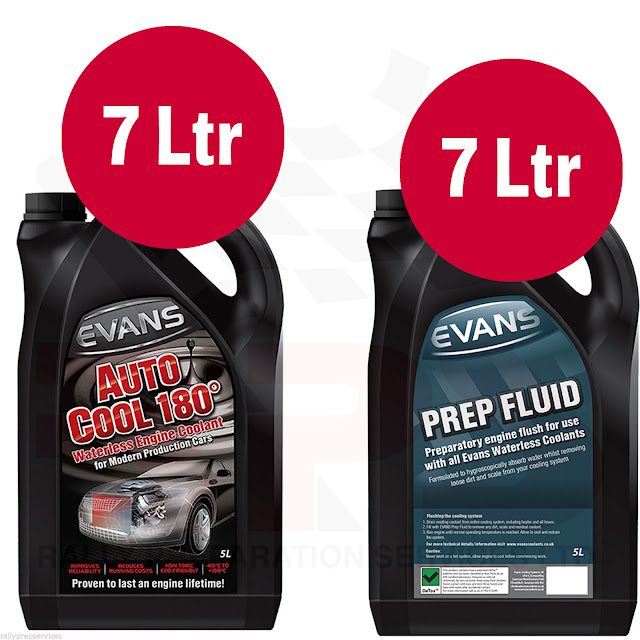