More on this story: "The Invictus Games for wounded servicemen and women have opened at the Queen Elizabeth Olympic Park in London.

The Games, organised by Prince Harry, will see competitors from 13 countries take part in events over four days.

The Prince of Wales, the Duchess of Cornwall and the Duke of Cambridge attended the opening ceremony, along with 6,500 spectators.

Prince Harry, who was introduced by US First Lady Michelle Obama, said "lives will be changed" by the Games." 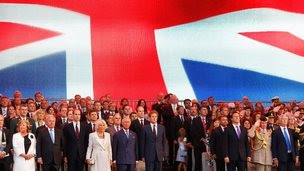