For Auction is my 1975 Land Rover Series III. I bought this with a view to running it over the winter and doing it up a little. However, I have now had planning through for an house extension so won't have the time to devote to it! It's clearly not mint as the photos show but is a nice solid little truck. It had a load of welding work a couple of years ago - kind of a semi restoration - and this year all it failed on was one of the rear brakes being below efficiency, (a simple case of adjustment). The MoT has until November next year to run. The vehicle has the rare safari roof. The previous owner had tried to remove what I presume was insulation on the underside of this, (see photo). Although the car sits on a T plate, upon a bit of digging it transpires that it was made in 1975. Although not a military spec one, I'd guess that it spent the first three years on an airbase or something. I only have one set of keys for the car and the only paperwork I have is the log book and the current MoT. There is no record of any service history. Before I bought it, a friend of mine had a look over it for me. He spent most of army career fixing these in NI so I took his word when he said it was a good one! If you're after a minter, this really isn't the car for you. If this was on the forecourt of a classic car dealer, I believe the correct phrase would be 'Patinated'. As the pictures show, there a marks here and there on the body work, (well all over it!). The interior is tatty and it only has two seats. If you can source the other ones, this will actually be a 7 seater! The sliding windows don't appear to open and I don't want to force them. The check straps on the doors have also perished although an industrious former keeper has used cable ties in their place! As said above, the vehicle seems basically sound and could be a really nice example given some time, effort and enthusiasm. Any trial / inspection more than welcomed. In fact, owing of the age of the vehicle and the fact I don't know an awful lot about them, I would really rather the car was viewed BEFORE you bid to make sure you are happy with it. The car is currently located in Hayes, North West London, (near Heathrow), and is available to be seen at most times with a bit of notice. A couple of pointers about the listing if I may: * I will let the auction run for 10 days to give people the opportunity to view the vehicle. * I won't end the auction early, I don't think that's fair on other bidders. * Car is for pick up only. * I am not interested in shipping the car abroad, sorry. * You are bidding to buy, not view. Please view the car before you bid. *No bids from people with under 10 feedback please. * Please don't ask for a Buy it Now price. I'll let the auction run and it makes what it makes. * Payment either by cash on collection or bank transfer please. All monies must be cleared before the vehicle can be taken. * Vehicle to collected within 5 days of the auction end. Sorry for all the T's and C's but I'm sure we all know why it's needed!
View Details - Additional Photos - Bid 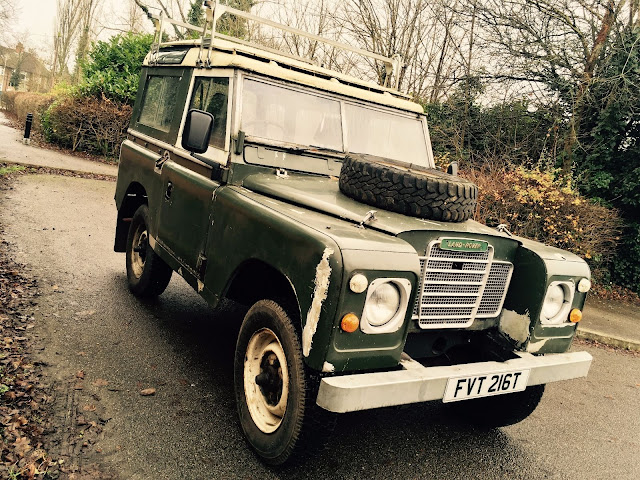 Posted by Defender LandRover at 19:48