Land Rover Defender custom from 90/110. 1 of a kind / 1st of it's kind Bitcoin mulitple magazine featured throughout Europe Bitcoin

Featured in several magazines throughout the UK and Europe

Made from a Land Rover Discovery chassis and modified to fit the custom Land Rover defender body. Made with a custom locating jig ensuring that all of the mounts sit in the right place for supporting the Defender chassis.

Fitted with a modified/tuned 200 TDI engine from the Discovery. Head has been removed to be gas flowed and ported before being meticulously matched to both the inlet and the exhaust manifolds, elimination the steps and ridges that can impede gas flow and reduce performance. The incoming air rushes in from the snorkel through a Defender/Discovery hybrid air box, then through a TD5 full-width intercooler routed via one-off pipework, joined by silicone hoses.

Tweaks to the turbo pressure, fueling quantity and pump timing help the engine to push out far more power and - more importantly - torque than it did when fitted by Land Rover’s Solihull factory.

The gearbox attached to the 200 TDI is the good old steadfast Defender LT77 mated to the transfer box out of the Discovery to give the slightly higher ratios for easier on-road cruising. Custom shortened and rebalanced prop shafts were fitted to suit the build.

As for stopping this monster, the cumbersome drum transmission brake was ditched and replaced by a drilled disc and caliper assembly custom fabricated and Goodridge braided brake lines resulting in a handbrake that will hold the Defender fast even on the most challenging slopes.

Suspension. Custom front shock absorber turrets, 40 mm shorter than standard, and a one-off rear shock mounts which locate the top of the shock absorber 60mm lower than standard. The rear radius rods are a fairly conventional cranked design, although the fronts are an altogether different twin-tube design. They are tough, practical and look good too and have a useful three degrees of extra castor built into them to compensate for two-inch taller springs, sourced from Britpart.

With suspension like this, relocating the springs is a must! Usually these are a bolt-on part, but as this was a one-off custom build, they were fabricated into the spring pans as an integral fitment.

Axle protection is a no-brainer for what this vehicle is capable of doing off road - fit it or risk having the differential pans crushed when off-road. Bolt-on versions were not an option. Instead, 6mm steel was folded into a tortoise-shell shape before being welded to the axle casing to replace the weak, pressed factory versions. These new pans also have the benefit of a slight increase in oil capacity.

The body came from a 110 Defender and was shortened from the front and rear to fit its new chassis.

‘Study this defender closely and the quality is so good that you would swear that this was done by Land Rover Special Vehicles’ - Land Rover Owner International.

Exo-skeleton rollover cage was made for this truck to suit the new and unique size. Bespoke for this truck, it features fixings for the Hela roof lights and the aerials and incorporates mountings for a roof tent. Rather than being fixed to the body both sides, the cage is attached to the chassis through the use of clamping plates, which accurately match the lines of the body inside and out. Further body protection is given by the rock sliders. Made especially for this vehicle, they incorporate jacking points made from tubular construction, with grip tape applied in strategic places so they can be used as steps to mount the Land Rover.

The unique front bumper was custom made, it has ultra-strong mountings for snatch recovery plus a tray for a Goodwinch Goldfish 950 front winch with 11mm plasma rope and a competition winch hook. To get this in nice and tight for maximum approach angle, the KBX front grill has been neatly cut and re-shaped. On the back is an unusual Kong 8500 winch, hidden under the rear floor hatch, with 9mm plasma rope. Both winches can be used from either inside or outside of the vehicle.

North American Specification lights always look good on a defender and this one is no exception. They had to be worked on and re painted before the light units were grafted into place. Rear lights have been sunk into the body rather than sticking out on plinths. The headlights are Bosh HID units which are great for night driving, while a strobe facility on both front and rear lights allows you to throw impromptu raves, if you so wish.

Inside, the perfect Land Rover wouldn’t be complete without an onboard compressor which used to be a pump used on a Range Rover self-leveling suspension, which uses one of the chassis rails as its air tank, giving high volume low-pressure air supply when needed. Twin batteries (Bosch s6 sealed gel high-discharge capability types) and a split-charge system are a must once you start running serious winches on this vehicle. Main systems run off the primary battery and all the ancillaries off the other, unless overridden by the driver when needed. A 12 to 240 volt 500-watt inverter allows the use of domestic appliances and there's an internal refrigerator point too (for soft drinks of course).

For driver and passengers, numb bums are prevented through the use of memory foam Exmoor trim Outlast seats and the threat of premature deafness allayed by the use of a full set of Wrights acoustic matting. You can’t buy head linings for a 100” Land Rover, so these had to be custom made like most parts on here.\ and looks like it came off the production line. None of the aftermarket switch panels would look right in this custom build, so a custom built panel was made from aircraft switches with practical flip-down safety covers which also houses the CB radio and map reading light.

The 100” was built for the UK roads in right-hand drive, but can easily be changed to left hand drive if needed by the new owner or by ourselves in the UK for an additional cost.

It has just had a full service, new clutch, disks/pads and a 12 month MOT will be put on fit for the UK roads.


After several messages, I can confirm the chassis is solid and good condition. It was a new nut and bolt build and the chassis was stripped down and protected to ensure it would last. 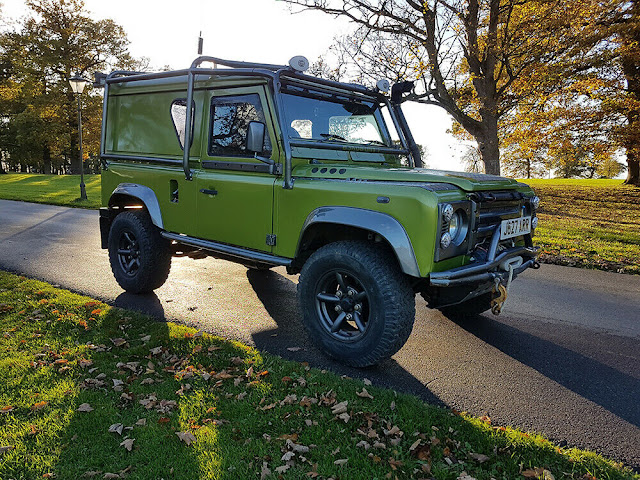 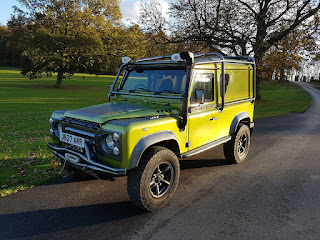 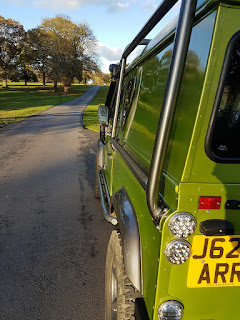 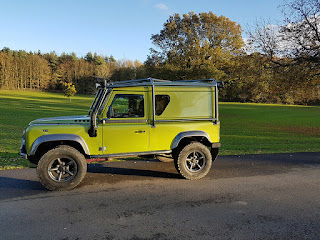 Posted by Defender LandRover at 15:11